Virginia State Police Captain Thomas W. Turner, a 50-year-veteran of the department, is the 2016 recipient of the Virginia Association of Chiefs of Police President's Award. Captain Turner was recognized at the VACP Annual Awards Banquet on September 20 at the Hotel Roanoke Conference Center. 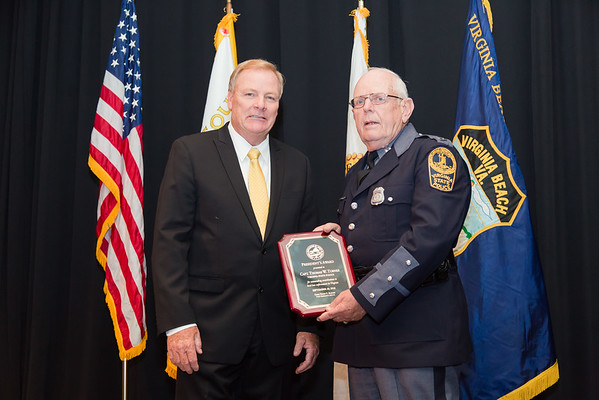 Captain Turner began his career with the Virginia State Police in 1966 as a dispatcher and transitioned to State Trooper just one day after his 21st birthday. From his early days with the department, Trooper Turner made serving the public the focus of his law enforcement career. And as he rose through the ranks, he maintained this priority in his duties and actions.

Captain Turner's true talent emerged when he was first assigned to the Criminal Justice Information Services Division (CJIS) as a lieutenant in 1996, where he later became Division Commander in 2007.

Virginia has one of the nation's leading sex offender registries because of Captain Turner's commitment and tireless efforts. He has been integral to the development of the registry and serves as a ready resource for law enforcement agencies that use the registry.

Captain Turner's leadership enabled the Virginia Firearms Transaction Center to grow into a nationally recognized and model program. The center handles the speedy transfer of firearms to non-prohibited persons while maintaining an impressive record of arresting individuals who are prohibited from purchasing or possessing a firearm.

Captain Turner chairs of the FBI's Advisory Policy Board, which makes recommendations to the Director regarding policy, technical, and operational issues for the FBI's Criminal Justice Information Services Division programs, including the FBI's Uniform Crime Report.

Captain Turner has served as Vice Chairman of the Board of Directors for the National Consortium for Justice Information and Statistics, and Criminal History Record (SEARCH). He was also the Chairman of the Board of Directors for AFIS Internet, and Vice Chairman of the FBI/Compact Council's Subcommittee on Policy and Procedures.  He fully recognizes the importance of his role on these national committees and uses his expansive knowledge and expertise to improve criminal justice services to Virginia's criminal justice agencies.

Recently, Captain Turner was recognized by the FBI for his pivotal role in solving a series of rape cases in Virginia and Kuwait. His persistence coupled with his latent print database knowledge led the Norfolk Police to make inquiries into recently accessible non-criminal fingerprint files. A latent print taken from a Norfolk crime scene matched fingerprints of a Navy serviceman. The FBI deemed this case the “Biometric Hit of the Year.”

As a subject matter expert in the vast array of criminal justice information/data, Captain Turner's knowledge and expertise is often sought by law enforcement officials across the Commonwealth and far beyond. He personally involves himself with other agency's concerns and provides expert knowledge and direction. In Virginia, most law enforcement executives know that if they have a CJIS question, Captain Turner will know the answer—and he won't have to do “research” to provide a response.

In the fall, Captain Turner will retire from the Virginia State Police with 50 years of service to the Commonwealth. He will leave a tremendous void in the agency and across Virginia. His historical knowledge of criminal justice and his overwhelming desire to serve can never be replaced. He will truly be missed, and Virginia law enforcement will never be able to thank him enough for this enduring dedication.

The Virginia Association of Chiefs of Police is proud to recognize Virginia State Police Captain Tom Turner with the 2016 President's Award.

NOTE: The CJIS Division is the largest Division within the Department of State Police with 252 employees. CJIS houses the Central Criminal Records Exchange (CCRE), the Virginia Criminal Information Network (VCIN), the Sex Offender Registry, the Firearms Transaction Center, the Automated Fingerprint Identification System (AFIS) and numerous other critical information systems/services for criminal justice purposes. Although CJIS provides critical support for the Department of State Police, much of the work of this very important division is dedicated to providing law enforcement support and services to other criminal justice agencies, government entities and the people of the Commonwealth and beyond.

The Virginia Association of Chiefs of Police & Foundation (www.vachiefs.org) is a statewide charitable organization of federal, state and local police chiefs and other law enforcement executives dedicated to improving the professionalism of police agencies in Virginia and to providing training and education programs for law enforcement executives. The Association was founded in 1926 and has more than 600 members.