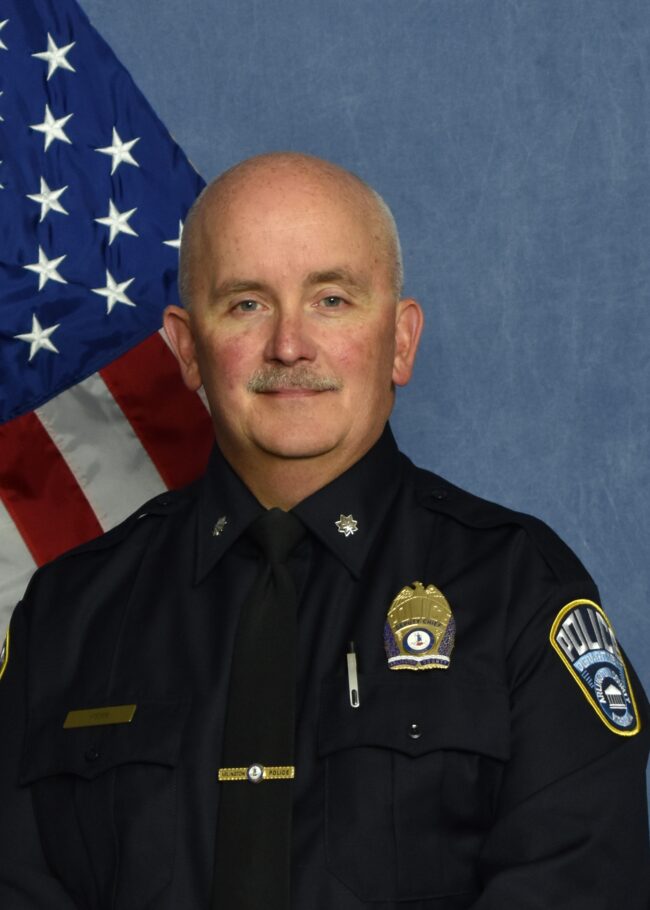 Today, following a nationwide search, County Manager Mark Schwartz announced his pick for the top law enforcement officer in Arlington County, Chief Charles “Andy” Penn. Having started his career as an Arlington patrol officer in 1992, Chief Penn brings almost 30 years of experience providing professional law enforcement services to our community. As Acting Chief of Police over the past nine months, he has provided the necessary leadership to implement a new body worn camera program and advance new policies to align with 21st Century policing practice. This includes updating policies and practices on bias-free policing and use of force. He has also worked collaboratively with other law enforcement agencies to form the Northern Virginia Critical Incident Response Team.

County Manager Mark Schwartz says that “Andy embraces the values and important work that is needed around issues of equity, justice, and safety and will work to advance racial diversity and inclusion in all of our public safety efforts.” Schwartz also noted, “He will bring a balanced approach to leading and understanding the issues of today and their implications for the Department's areas of growth and opportunity. I am confident that Andy will be instrumental in advancing partnerships across our community and similarly with regional stakeholders.”

“The efforts to continue to improve our police department will require leadership and collaboration throughout the County on issues that range from mental health response to direct public safety work to our approach to managing 911 calls,” stated County Board Chair Matt de Ferranti. “I fully support the Manager's choice of Andy Penn as our next chief as he has earned my trust and the trust of many in our community, and is the right person to lead this important work. His commitment to listening, hard work, honest conversations, and openness will help keep our community safe. I respectfully ask all Arlington residents to give Chief Penn the chance to earn your trust, too.”

“As a longtime member of the Arlington County Police Department and our community, I am honored and humbled to be appointed to this position,” stated Chief Andy Penn. “I am committed to bringing change and transformation to public safety and working collaboratively with the community on a broad range of issues, including racial equity.”

In addition, Captain Darrin Cassedy will be appointed to Deputy Chief of Operations, a role he has held in an acting capacity for the last nine months. In this role, he will be responsible for providing effective administration and specialized support services to the Patrol, Tactical Operations, and Special Operations Sections of the Police Department.

About the Recruitment Process

The recruitment for a new police chief included a nationwide search to identify a candidate that aligns with our values and aspirations to be a diverse and inclusive community, advance practice and policies for 21st century policing, work collaboratively with internal and external stakeholders, and implement the Police Practice Group recommendations. View more details about the search process.

In addition, residents weighed in through a communitywide survey and multiple focus groups throughout the fall of 2020.  Read a summary of the community feedback gathered as part of the search process.

Charles “Andy” Penn is appointed as the Chief of the Arlington County Police Department (ACPD) following a nine-month period as the Acting Chief of Police. During his tenure as Acting Chief, Penn provided oversight, direction and strategic planning for all aspects of the Police Department. He is committed to advancing best practices in policing and identified and focused departmental efforts in several key areas including implementing a Body Worn Camera Program, establishing internal workgroups to review police practices, including creating a Bias-Free Policing policy, and legislative changes and joining area law enforcement agencies in the formation of the Northern Virginia Critical Incident Response Team. Penn will guide the agency during a transitional time in law enforcement while focusing on trust, transparency, accountability and communications.

Penn is a 29-year veteran of the ACPD, beginning his career as a patrol officer in 1992. He rose through the ranks and was promoted to Deputy Chief of Police in July 2015. In this role, Penn led the Operations Division, overseeing the daily operations of two Patrol Sections, Community Resource Section, Tactical Operations Section, Operation Support Section and the Special Operations Section. He also led the Systems Management Division, which oversees the Human Resources Management Section, Support Management Section, Training Unit, Tactical Training Unit, Property and Evidence Unit, Procurement and the Fiscal Management Unit. Penn has extensive investigative experience having previously held positions in the Auto Theft Unit, Homicide/Robbery Unit and the Internal Affairs Section.

Penn is committed to being actively engaged in the Arlington community. Throughout his tenure, he has worked in numerous collaborative partnerships with community organizations, advocacy groups, law enforcement partners and government agencies. As leader of the Second District Community Policing Team, he worked to develop strong partnerships with community members and businesses to address public safety concerns. He remains committed to working collaboratively with the Arlington community to build and maintain community trust and safety.

Penn holds a bachelor's degree from Radford University in Criminal Justice and a master's degree in Security Studies (Homeland Security) from the Naval Postgraduate School, Center for Homeland Defense & Security. He has undertaken study in several educational programs, including the Police Executive Research Forum's Senior Management Institute for Police (SMIP), as well as, the FBI National Academy.

When he is not actively engaged as a member of ACPD, Penn serves as an Adjunct Professor at Marymount University's Forensic and Legal Psychology graduate program and coaches youth baseball. He has been married to his wife for over 29 years and they have three adult children.