Pentagon Police Officer George Gonzalez died after being stabbed Tuesday during a burst of violence at a transit center outside the building, and a suspect was shot by law enforcement and died at the scene, officials said.

The Virginia Association of Chiefs of Police recommends that all Virginia law enforcement officers shroud their badges in honor of Pentagon Police Officer George Gonzalez who was killed Tuesday, August 3.

Shrouding is recommended through the day of Officer Gonzalez's funeral -- Monday, August 16. Arrangements are posted below. A separate memorial service in the National Capital Region is in the planning stages.

Our thoughts and prayers are with Officer Gonzalez's family, friends and fellow officers at the Pentagon Force Protection Agency at this exceedingly difficult time.

MEMORIAL SERVICE IN THE NATIONAL CAPITAL REGION:
In the planning stages.  Will post updates here as we learn them. 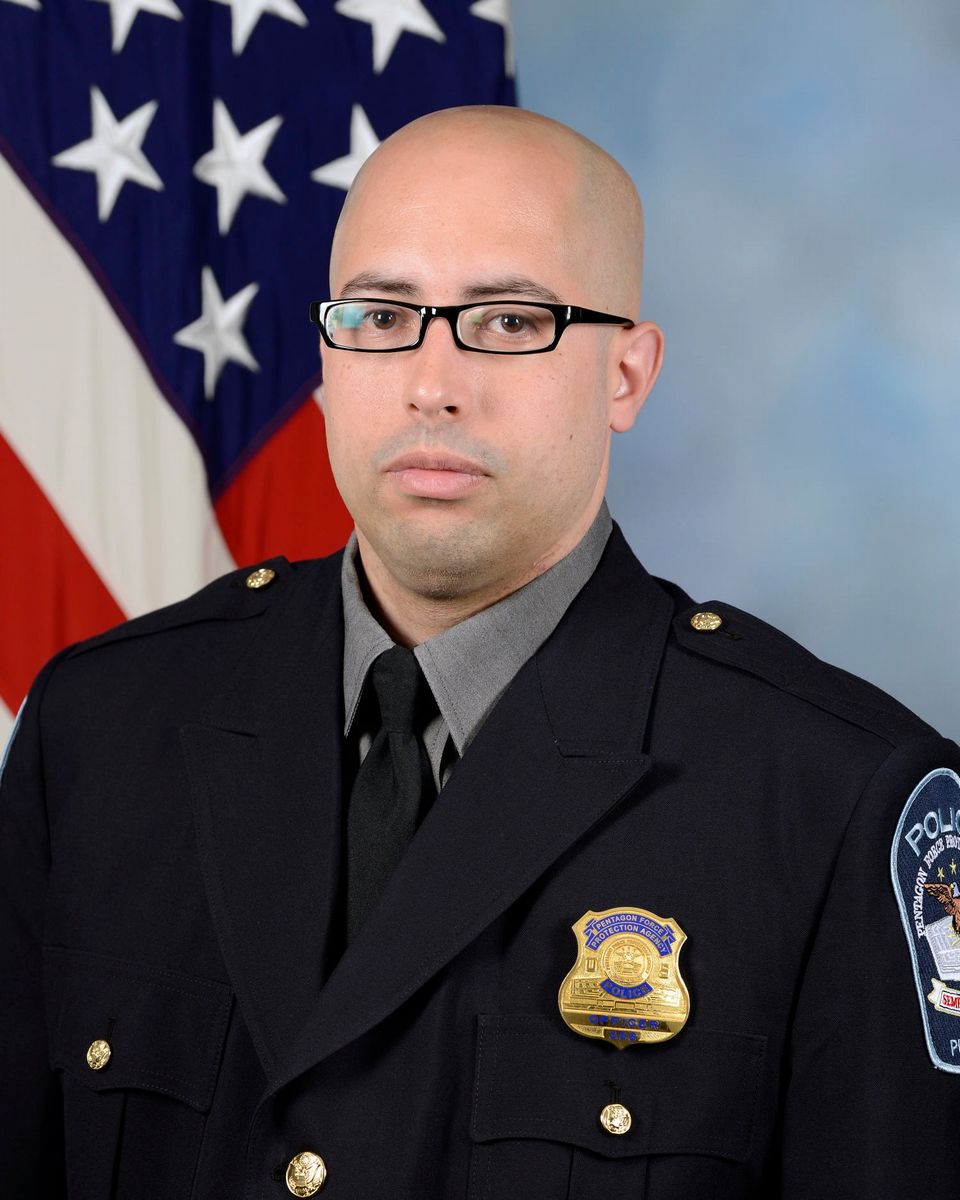 Last night, the Pentagon Force Protection Agency observed End of Watch for Pentagon Police Officer George Gonzalez who was tragically killed yesterday during the incident at the Pentagon bus platform.

A native of Brooklyn, New York, he was a die-hard Yankees fan. He was a graduate of New York City's Canarsie High School. George Gonzalez joined the Pentagon Force Protection Agency (PFPA) as a police officer on July 22, 2018. As a Pentagon Police officer, he took our mission of “protecting those who protect our nation” to heart. He was promoted twice and attained the rank of Senior Officer in 2020. A gregarious officer, he was well-liked and respected by his fellow officers.

As a military and police veteran, Officer Gonzalez had served previously with the Federal Bureau of Prisons, the Transportation Security Administration, and United States Army. He was awarded the Army Commendation Medal for his service in Iraq.

Officer Gonzalez embodied our values of integrity and service to others.

As we mourn the loss of Officer Gonzalez, our commitment to serve and protect is stronger.

Officer Gonzalez's family is in our thoughts and prayers. May he rest in peace.

WASHINGTON (AP) — A Pentagon police officer died after being stabbed Tuesday during a burst of violence at a transit center outside the building, and a suspect was shot by law enforcement and died at the scene, officials said.

The Pentagon, the headquarters of the U.S. military, was temporarily placed on lockdown after someone attacked the officer on a bus platform shortly after 10:30 a.m. The ensuing violence, which included a volley of gunshots, resulted in “several casualties,” said Woodrow Kusse, the chief of the Pentagon Force Protection Agency, which is responsible for security in the facility.

The deaths of the officer and the suspect were confirmed by officials who were not authorized to discuss the matter and spoke to The Associated Press on condition of anonymity. The Fairfax County Police Department also tweeted condolences about the officer's death.

The circumstances remained unclear even hours after the violence had ended,. But the episode on a busy stretch of the Washington area's transportation system jangled the nerves of a region already primed to be on high alert for violence and potential intruders outside federal government buildings, particularly following the Jan. 6 riot at the Capitol.

At a Pentagon news conference, Kusse declined to confirm that the officer had been killed or provide even basic information about how the violence had unfolded or how many might be dead. He would only say that an officer had been attacked and that “gunfire was exchanged.”

Kusse and other officials declined to rule out terrorism or provide any other potential motive. But, Kusse said the Pentagon complex was secure and “we are not actively looking for another suspect at this time.” He said the FBI was leading the investigation.

The FBI issued a similar statement, confirming only that it was investigating and that there was “no ongoing threat to the public” but declining to offer details or a possible motive.

Tuesday's violence occurred on a Metro bus platform that is part of the Pentagon Transit Center, a hub for subway and bus lines. The station is steps from the Pentagon building, which is in Arlington County, Virginia, just across the Potomac River from Washington.

An Associated Press reporter near the building heard multiple gunshots, then a pause, then at least one additional shot. Another AP journalist heard police yelling “shooter.”

A Pentagon announcement said the facility was on lockdown, but that was lifted after noon, except for the area around the crime scene.

Defense Secretary Lloyd Austin and Gen. Mark Milley, chairman of the Joint Chiefs of Staff, were at the White House meeting with President Joe Biden at the time of the shooting. Pentagon spokesman John Kirby said Austin returned to the building and went to the Pentagon police operations center to speak to the officers there.

It was not immediately clear whether any additional security measures might be instituted in the area.

In 2010, two officers with the Pentagon Force Protection Agency were wounded when a gunman approached them at a security screening area. The officers, who survived, returned fire, fatally wounding the gunman, identified as John Patrick Bedell.

Associated Press writers Colleen Long in Washington and Matthew Barakat and Sagar Meghani in Arlington, Va., contributed to this report.