Big Stone Gap Police Officer Michael Chandler was shot Saturday morning while responding to a call for a welfare check. He succumbed to his injuries later the same day.

The Virginia Association of Chiefs of Police recommends that all Virginia law enforcement officers shroud their badges in honor of Big Stone Gap Police Officer Michael Chandler who was shot and killed Saturday, November 13 while responding to a call for a welfare check. Today was his birthday.

Shrouding is recommended through the day of his funeral – Wednesday, November 17.

Our thoughts and prayers are with Officer Chandler's family, friends and fellow officers at this exceedingly difficult time.

Bagpipes will be played for the family by First Sergeant Michael Mccanon, Virginia State Police.

The Graveside processions line up will begin at 9:00 a.m. at Bullitt Park in Big Stone Gap, it will leave at 11:00 a.m. those wishing to pay their respects for the family are asked to assemble on the sidewalks in Big Stone, or anywhere along the procession route to Powell Valley Memorial Gardens. Graveside services will be limited to family and emergency personnel.

A GoFundMe has been set up for Officer Chandler's family as well. 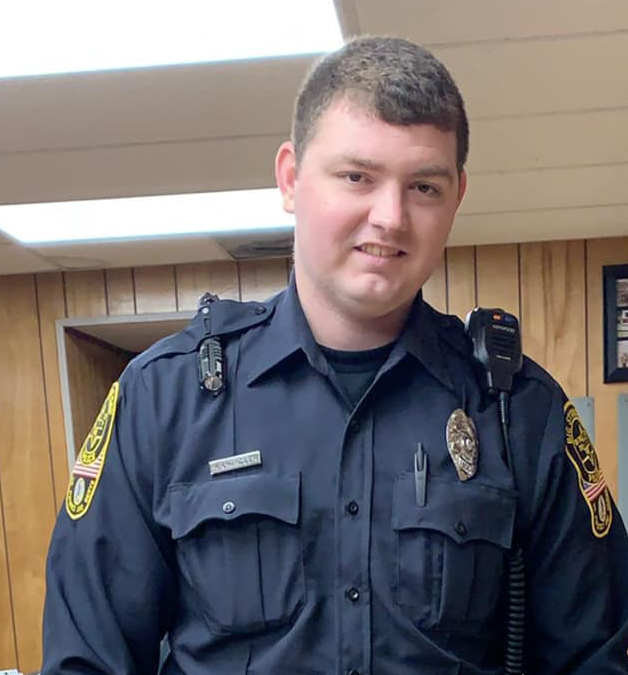 It is with a heavy heart that I must inform our community of the line of duty death of Officer Michael D. Chandler. His battle to survive today was truly miraculous. But, he succumbed to his injuries around 7:00 p.m. this evening at the hospital with his family at his side. Mike's loss will be felt by our town and across all of Wise County. Not only did he serve as an officer with the Town of Big Stone Gap Police Department, but also as a volunteer with the Big Stone Gap Fire Department.

Please keep his family in your prayers tonight, as this should have been a day to celebrate his 29th birthday - not a day to mourn his passing.

I ask that the media respect the family's wishes to not contact them during this incredibly difficult time.

A Big Stone Gap man is in police custody tonight after an extensive search and investigation by local, state and federal law enforcement following the fatal shooting of a The Town of Big Stone Gap Police Officer early Saturday (Nov. 13). The 33-year-old male was apprehended without incident by the Kingsport Police Department Patrol Division, Criminal Investigations Division and SWAT Team shortly after 8 p.m. Saturday at the Travel Inn located in the 800 block of Lynn Garden Drive in Kingsport, Tenn.

He is currently being held on probation violations out of South Carolina and Wise County, Va. Charges related to the shooting of the officer are pending at this time. The United States Marshals Service FBI – Federal Bureau of Investigation Wise County Sheriff's Office and BRISTOL VIRGINIA POLICE DEPARTMENT assisted w/the apprehension in Kingsport, Tenn.

The investigation remains ongoing at this time, in coordination with the Big Stone Gap Police Department, Wise County Sheriff's Office and Chuck Slemp, Commonwealth's Attorney of Wise County & the City of Norton.

Anyone with information related to this incident, please contact the Virginia State Police at 276-228-3131 or at questions@vsp.virginia.gov.

Background:
While on duty, Town of Big Stone Gap Police Officer Michael Chandler stopped out with an individual shortly after 4 a.m. Saturday (Nov. 13) who asked the officer to conduct a welfare check on an individual at a vacant residence in the 2500 block of Orr Street. When Officer Chandler arrived at the residence, he encountered at least one individual. It was during this encounter that Officer Chandler was shot.

A Wise County Sheriff's Office Deputy was first to arrive on scene. Officer Chandler was found lying unconscious in a ditch along the driveway to the residence. His patrol car and another vehicle were both at the scene, but there was no other person at the scene.

The officer was initially transported to Norton Community Hospital and then flown to Johnson City Medical Center for treatment.