Chief Goodman served as President of the VACP from 2018-19 and continues to serve as the Chairman of the Awards Committee. 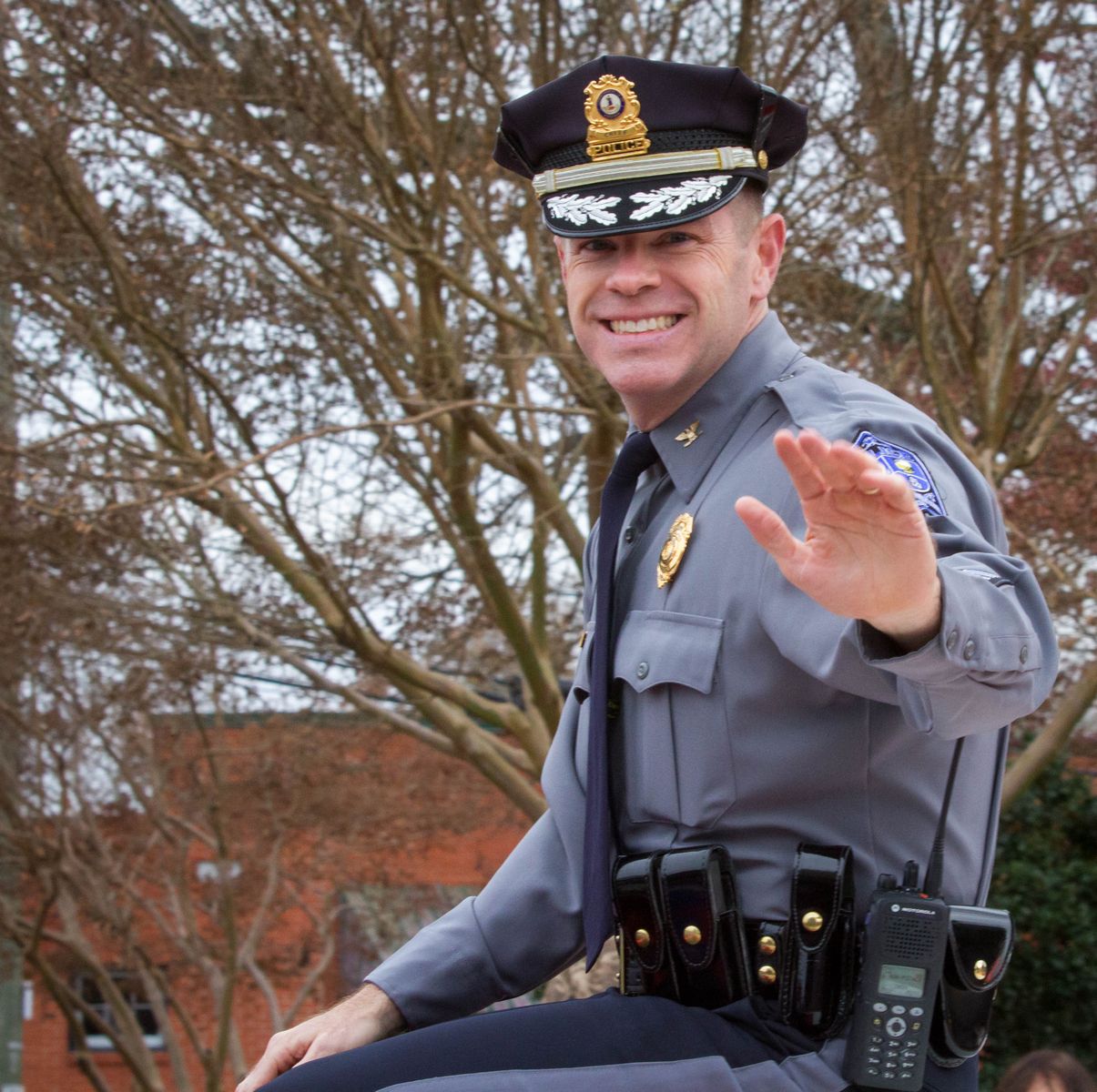 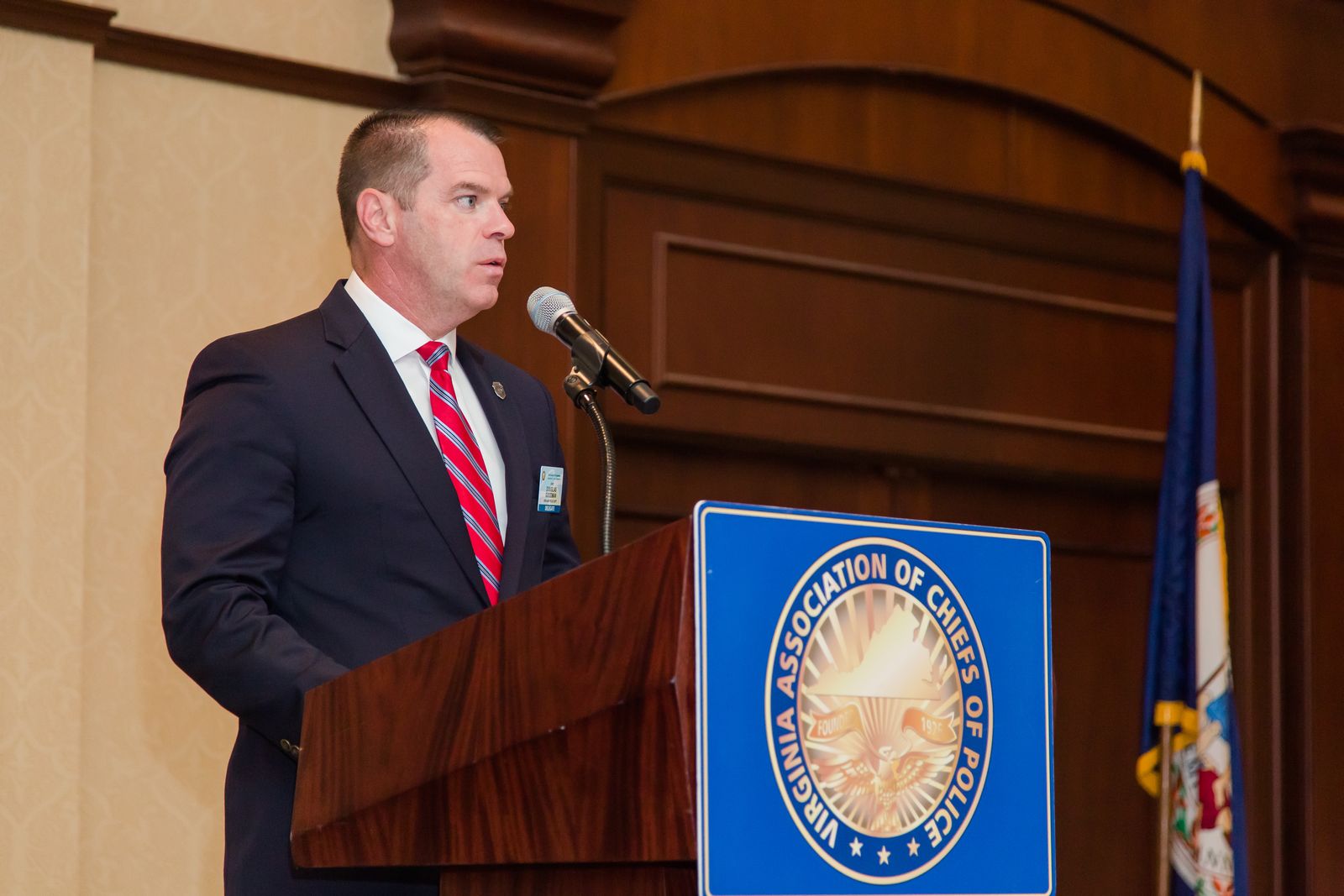 ASHLAND, VA (January 19, 2022) – During a regular meeting of the Ashland Town Council on Tuesday, January 18th, Town Manager Josh Farrar announced that Chief Doug Goodman will retire on April 1st, 2022 from the Ashland Police Department after 14 years of exemplary leadership at the agency.

“Chief Goodman has been a powerful force for good during his tenure here in Ashland and his daily presence will be missed,” said Mr. Farrar. “After nearly 29 years in law enforcement in Hanover County and the Town of Ashland, Chief Goodman is retiring from his role with the agency to spend more time with his family and friends.”

Chief Goodman joined the Ashland Police Department (APD) in August 2007 after serving the Hanover County Sheriff's Office for over 14 years and reaching the rank of Lieutenant. While with APD, he served as an accreditation team leader and a Commissioner for the Commission on Accreditation for Law Enforcement Agencies (CALEA), served on the Board of the Virginia Center for Policing Innovation, is a past President of the Virginia Association of Chiefs of Police, and a past Chair of the Central Virginia Law Enforcement Chief Executive Association.

“Over the last decade plus, Chief Goodman has developed a reputation for community-centered policing,” said Steve Trivett, Ashland's Mayor. “He's been at the forefront of many of the practices and reforms in policing that other agencies across the Commonwealth and the country are just now beginning to implement. He truly listens, has never shied away from tough conversations or constructive feedback, and has led the agency with strength, compassion, and an improvement mindset from day one.”

Some of Chief Goodman's most impactful work in and with the community include his engagement with community leaders to decrease blight and improve conditions at several long-term stay motels along Ashland's I-95 and Route 1 corridors, as well as working closely with Randolph-Macon College to improve the safety of the campus community. In 2009, the agency was awarded a Virginia Municipal League Award for his work to improve the quality of life for residents in the South Taylor, Arlington, and Randolph Street corridors.

In addition to sustained reductions in crime and accidents, Chief Goodman coordinated the effort to reach CALEA (Commission on Accreditation for Law Enforcement Agencies) accreditation for the Department in 2008, which the agency maintains to this day through rigorous independent assessments every four years. The Department remains one of only 35 agencies in the Commonwealth to maintain CALEA accreditation and is the smallest municipal police department to do so.

A fierce advocate for the agency and his officers, Chief Goodman fostered an environment within APD that encouraged data driven approaches to crime and traffic safety, which earned the agency multiple state and national awards. Under his leadership, APD secured over $1 million in grant funding, which enabled APD to be one of the first agencies in the Richmond region to deploy officer worn cameras to every patrol officer and to equip them with other law enforcement technologies.

“The current quality of the agency and caliber of our officers is a direct result of his creative and determined approach to recruitment,” said Mr. Farrar.

Chief Goodman also worked with key members of the community to form the Ashland Police Foundation and partnered with Randolph-Macon College and Reynolds Community College over the years to create a Cadet program aimed at recruiting officers that mirror the demographics of Ashland's community.

“The Ashland Police Department is one of the finest law enforcement agencies in the Commonwealth and the town is blessed to have such a fine group of professional, capable, and most importantly, caring individuals patrolling our streets,” Chief Goodman said. “None of the accomplishments credited to me are my own. It is the team that made this town safer and this community stronger.”

Given that community relationships have been a cornerstone of Chief Goodman's success in Ashland, including the community in the process to select his successor is a priority for the Town. Mr. Farrar said he plans to form a Hiring Advisory Committee and solicit public input via a survey to aid in selecting Chief Goodman's replacement ahead of his retirement in April to ensure a seamless transition for APD and the community.

“It is the strength of this team and the deliberate and proactive attention to succession planning we have put into place over the years that brings me comfort,” Chief Goodman said. “I know I can retire and the operations of APD will continue to run smoothly and effectively.”

“Replacing him won't be easy, but I have great confidence in the team Chief Goodman has built and their ability to continue the path he laid out for success,” added Mr. Farrar.

ABOUT THE TOWN OF ASHLAND
Affectionately referred to by locals as the "Center of the Universe," Ashland is situated approximately 15 miles north of Richmond and home to over 7,700 residents. A small town with a big personality, railroad tracks run the length of Ashland's historic main street, which is lined with shops, restaurants, a historic inn, a brewery, and the campus of Randolph-Macon College. The Town of Ashland operates under the council-manager form of government, which combines the strong political leadership of an elected town council with the professional managerial experience of an appointed town manager. The Town of Ashland prides itself on providing efficient and effective government services that support our community and enhance our quality of life. Learn more about the Town of Ashland here.