Shrouding is recommended through the day of funeral services.  Our condolences to the Bridgewater College Police Department and the officers' loved ones.

The Virginia Association of Chiefs of Police recommends that all Virginia law enforcement officers shroud their badges in honor of Bridgewater College Police Officer John E. Painter, 55, and Campus Safety Officer Vashon "J.J." A. Jefferson, 48, who were killed Tuesday, February 1, 2022 by an active shooter on campus.

Shrouding is recommended through the day of funeral services — Wednesday, February 9, 2022.

The VACP expresses our sincerest condolences to the Bridgewater College Police & Safety Department and the family and friends of these two officers. 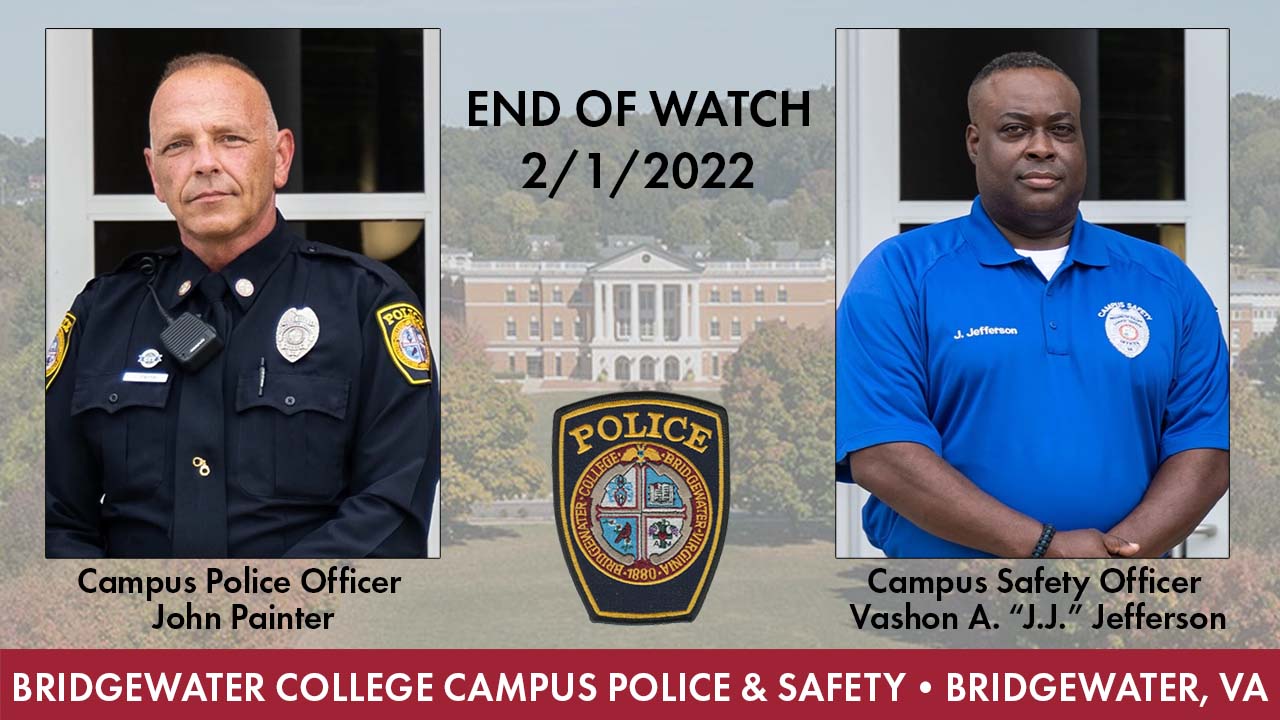 Memorial Service for Both Officers:
Open to the Public

Livestream:
The memorial service will be streamed live on Bridgewater College's YouTube channel, so reporters can view/record the entire service in real time:
http://bridgewater.edu/live.

Flag Order:
Governor's Flag Order for the Bridgewater College Officers' Memorial Service — State flags to be lowered to half-staff at sunrise on February 9, 2022 and remain at half-staff until sunset.

Memorial Fund:
John Painter and Vashon “J.J.” Jefferson Memorial Student Support Fund:  www.bridgewater.edu/johnandjjfund
**NOTE: This is a scholarship fund for college students in memory of the two officers. It is not a fund to help the officers' families. Officer John Painter Officer Painter, 55, joined the Bridgewater College Police Department in May 2019. His law enforcement career began in 1989 as a deputy sheriff in King George. Prior to joining BC, Officer Painter retired as chief of the Grottoes Police Department in 2018 after 18 years. He served in the U.S. Air Force from 1985-1988 and as an intelligence analyst in the U.S. Army National Guard from 1999-2000. Officer Vashon “J.J.” Jefferson Officer Jefferson, 48, joined Bridgewater College in August 2018. His law enforcement career began in 1997 as a deputy with the Fairfax County Sheriff's Office before serving as a National Reconnaissance Officer in Chantilly, Va., from 1999-2011. Prior to joining Bridgewater College, Officer Jefferson served as a sergeant with Shenandoah University Department of Public Safety. During his time at SU, his personable and proactive security initiatives led to him receiving the James B. Wilkins Award in 2017.

2 officers killed in shooting at Bridgewater College, suspect in custody

BRIDGEWATER, Va. (WWBT) - Police said two officers were shot and a suspect is in custody following reports of an active shooting on Bridgewater College campus.

The situation continues to unfold and possible injuries related to the situation are unknown.

In a statement from the college, multiple law enforcement agencies responded to campus for the ”initial report came in that two officers had been shot and the armed suspect had fled the scene.”

In an email sent to students and staff, the college said Campus Police Officer John Painter and Campus Safety Officer J.J. Jefferson were shot and killed. 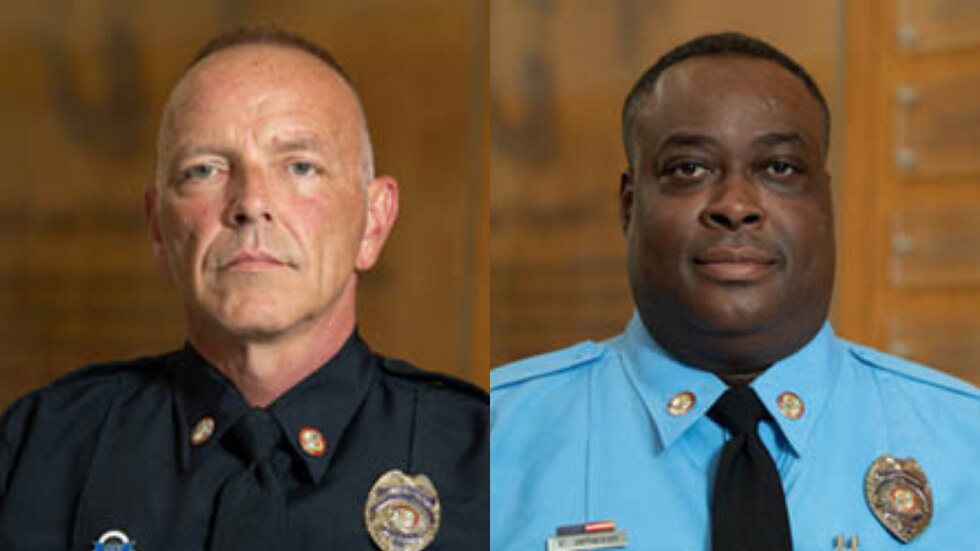 “These officers were close friends, known to many of us as the “dynamic duo.” John was J.J.'s best man in his wedding this year. They were beloved by students, faculty and staff. I hurt for their families and loved ones, as I know we all do,” Bridgewater College President David Bushman said in the email.

The college told students to shelter in place and to “text to let your loved ones know you are okay.”

About 45 minutes after the initial alert from the college, it said an individual was in custody following a massive search.

The campus community was told to shelter in place for several hours, but the order was lifted just after 4:30 p.m. During the shelter in place, Bridgewater also tweeted not to be alarmed because police are moving through the buildings and to listen to their instructions.

The Bridgewater Community Center is closed at this time, and the town is asking people to avoid the college and area around it until further notice. The shelter in place order for the town and campus are both lifted.

Virginia Governor Glenn Youngkin and Attorney General Jason Miyares have been briefed on the situation and are continuing to monitor it.

“This is a sad and dark day for Bridgewater College. I know we all have so many questions and not many answers. One thing I do know, though, is that we will rally around one another and support each other as we move forward from this day. We are all victims, though some much more so than others, and it will be important that we each seek to find comfort and support in the ways most meaningful for us,” Bushman said in the email to students.

Virginia State Police is on the scene, and Harrisonburg Police are also assisting.

Last year in October, the college was ranked as Virginia's safest college by SafeAtLast.

NBC12 is heading to the scene. We will update this story as we learn more.

Alexander W. Campbell, 27, will be arraigned on the four felony charges today, Feb. 2, 2022, at 1 p.m. in the Harrisonburg/Rockingham County General District Court.

Those on campus and within the town of Bridgewater can expect to see Virginia State Police personnel returning to the area today (Feb. 3).Their presence and activities are related to the ongoing investigation that is focusing on retracing the shooter's movements from the time the shooting occurred on the campus to his apprehension on the island in the North River.

MEDIA NOTES: VSP will not be holding any additional press conferences related to this investigation. The families of both officers are also asking for the media to respect their privacy and not contact them during this difficult time.

The incident began at approximately 1:20 p.m. Tuesday when a Bridgewater College Police Officer and a Bridgewater College Campus Safety Officer responded to call for a suspicious adult male being located on the grounds of Memorial Hall. After a brief interaction with the man, the subject opened fire and shot both officers. The man then fled on foot.

A man fitting the shooter's description was located on Riverside Drive in the town of Bridgewater. He then waded through the river and onto an island in the North River, which is located in the town of Bridgewater. Harrisonburg Police, Rockingham County Sheriff's Deputies and Virginia State Police Special Agents took the individual into custody without further incident.

The man, identified as Alexander Wyatt Campbell, 27, was suffering from a non-life threatening gunshot wound. Campbell was transported to Rockingham Memorial Hospital, where he was treated and released. State police is still working to determine if he was shot by the Bridgewater College Police Officer or suffered a self-inflicted gunshot wound. Multiple firearms associated with Campbell have been recovered as evidence. Campbell's last known address was Ashland, Va.

Virginia State Police charged Campbell with a total of four felonies: 2 counts of capital murder, 1 count of first degree murder, and 1 count of use of a firearm in the commission of a felony. Campbell is being held without bond at the Rockingham County Jail.

State police are requesting anyone with video/images or information related to this shooting, to please share with investigators at vsphtcs@vsp.virginia.gov.

The FBI and ATF are assisting with the ongoing criminal investigation.

Despite the valiant efforts of responding officers and paramedics, the two officers succumbed to their injuries at the scene.