Three people, including Covington Police Officer Caleb Ogilvie, are dead following a shooting on Monday afternoon, according to Virginia State Police. Shrouding is recommended through the day of funeral services, Saturday, March 19.

The Virginia Association of Chiefs of Police recommends that all Virginia law enforcement officers shroud their badges in honor of Covington Police Officer Caleb Daniel Ogilvie, 35, who was shot and killed Monday, March 14, 2022.

Shrouding is recommended through the day of funeral services – Saturday, March 19. Further information on memorial arrangements are posted below.

The VACP expresses our sincerest condolences to the Covington Police Department and the family and friends of Officer Ogilvie.

QUESTIONS?
Any questions about arrangements can be directed to Lt. Juan Roldan at 540-525-7207.

He was born November 3, 1986 in Wisconsin to Daniel Raymond Ogilvie and Delora Anne Chambers Ogilvie. He served four years in the United States Marine Corp with two tours in Iraq and Afghanistan and continued to serve his community as a police officer for the City of Covington. He was a volunteer fire fighter and EMT for Roanoke County, a Chicago Bears fan, and enjoyed creating TikTok's for the Covington Police Department. He loved spending time with his family, loved his German shepherd dogs, Penny and Major, and loved making people laugh.

In addition to his parents he is survived by his wife, Natasha Erin Ogilvie of Selma; four daughters, Emersyn and Wrenley Ogilvie of Selma, and Kileigh and Rilyn Ogilvie and their mother, Malarie Ogilvie, of Christiansburg; a sister, Abigail Chavez of NC; two brothers, Rian Ogilvie of IL and Benjamin Ogilvie of NC; father-and mother-in-law, Oler Dudley Jr. and Brandy of Clifton Forge; sister-and brother-in-law, Teresa Wright and Joseph of Clifton Forge; brother-and sister-in-law, Oler Dudley III and Mallory of Norfolk; and a number of nieces and nephews.

"It is with deep regret that I must share with our community the news that Police Officer Caleb Ogilvie, 35, was shot and killed while responding to a domestic shooting at the Covington Farm and Fuel Monday afternoon. On behalf of the City of Covington Police Department, I want to express my gratitude for the incredible outpouring of support from the residents of Covington and Alleghany County.

A fund to support Caleb's family has been set up through Fund the First and online donations can be made at https://fundthefirst.com/campaign/line-of-duty-death-covington-va-police-officer-caleb-daniel-ogilvie-raz1wu " 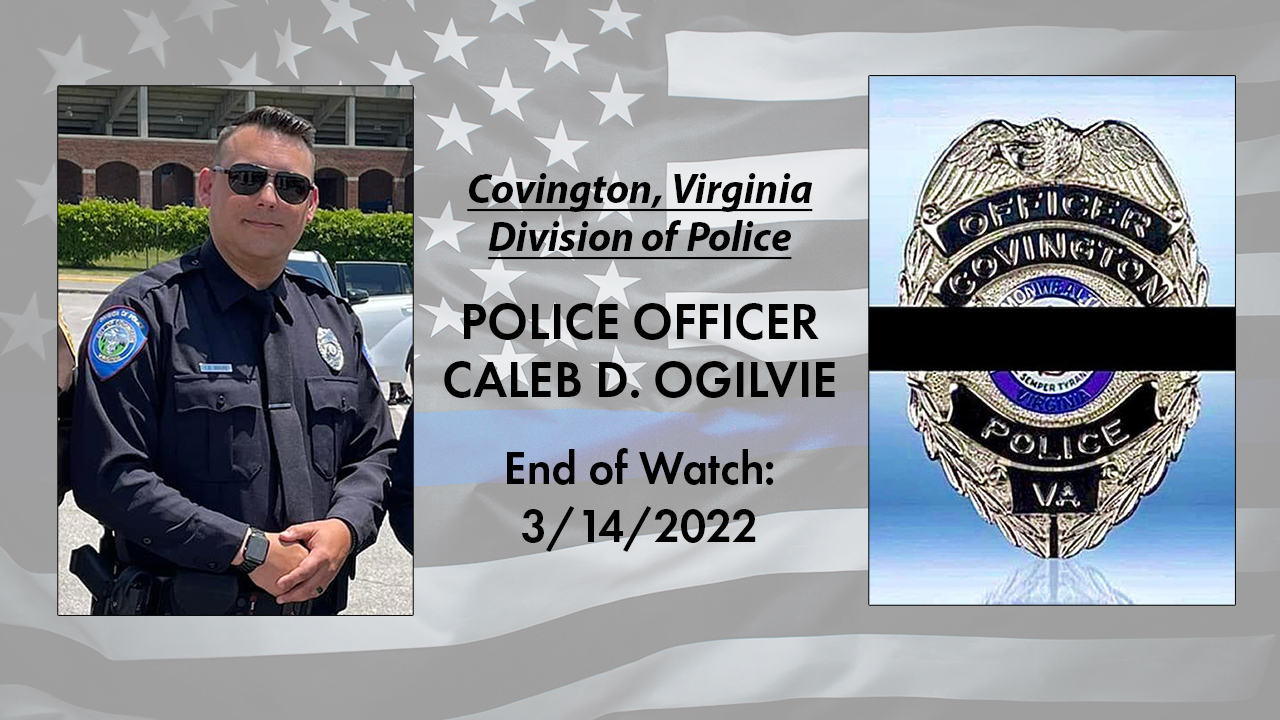 COVINGTON, Va. (WSET) —Residents are encouraged to participate in a processional Tuesday afternoon following the death of a Covington Police officer.

The police officer and two civilians died following a triple shooting Monday night at a gas station in the City of Covington.

"This is a senseless loss that is being felt by so many today," the Covington police chief said.

A processional will be held from the medical examiner's office to Nicely's funeral home in Clifton Forge at 2 p.m. Tuesday. All are welcome to show pay their respects by lining up along the street.

Law enforcement responded to the Covington Farm and Fuel convenience store in the 100 block of North Alleghany Avenue around 4:30.

Virginia State Police said Toney Poulston, Jr., 42, of Covington, entered the gas station and a domestic situation ensued with a relative of the store who was also an employee. That employee was identified as Randall Lee Paxton, 64, of Covington.

When law enforcement arrived, Poulston, armed with a pistol, exited the store and shots were exchanged between him and responding officers.

Police officers then entered the store and found Paxton dead of a gunshot wound.

Another employee inside the store, Paxton's wife, was not injured.