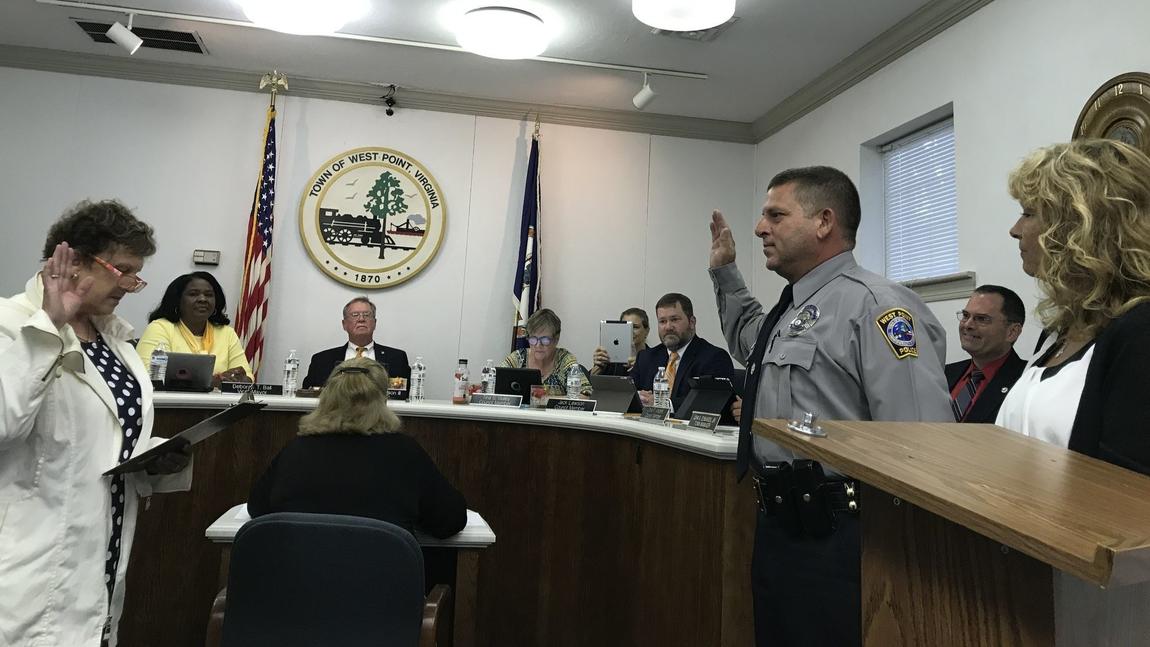 Both chiefs were met with a standing ovation and applause from those at the meeting.

After being sworn in, Sawyer and his wife Betty went around and shook town council and the Mayor's hands. She then replaced his officer badge with a chief of police badge.

Mayor Jim Hudson said that as sad as they are to see Mawyer leave, the town is equally as happy to welcome Sawyer as the new chief.

“Tim has been here a while and has done a great job as building inspector and auxiliary officer,” Hudson said. “He has proven himself and there is nobody that I know of that I would rather have take over this position.”

Sawyer then thanked town council and the citizens attending for letting him serve the town, and called becoming chief the opportunity of a lifetime.

"I look forward to serving this community and providing protection and service,” Sawyer said. “I'd like to promise to you that I will hold this office in the highest esteem and if I can do as much as Bobby Mawyer has done for this town, I've done a good job. To my officers, I'd like to promise them that I will always serve them fairly and with dignity.”

Mawyer jokingly said there was one more official presentation before Sawyer sat down, Mawyer handed Sawyer the police chief work phone and said “it's all charged up and ready for you, buddy.”

Mawyer was then honored with a resolution by West Point town council for his years of service to the town and police department.

Hudson read the honorary resolution, saying Mawyer has brought distinction and honor to the police department and town.

“He's been involved and supported programs such as Trunk or Treat, local Girl and Boy Scouts, Bridges for Change, Take Back the Night, school reading programs, Toys for Tots and YMCA's Shop with a Cop and summer programs and more,” Hudson said.

“The mayor and town council are proud to have been represented by Robert Mawyer and to call him colleague and friend,” Hudson said.

The town has a had a lot of great police chiefs, and Mawyer is among the best, Hudson said.

Mawyer thanked town council, Hudson and the citizens and said being chief was the highlight of his career.

“I could not think of a better place to be, it's been a blessing and I feel very fortunate to be associated with you and all of the folks here in West Point,” Mawyer said.

‘Thank you to all of you here tonight and I ask that you support Chief Sawyer in the same manner and I look forward to hearing many good things in the years to come as the result of the new change here.” 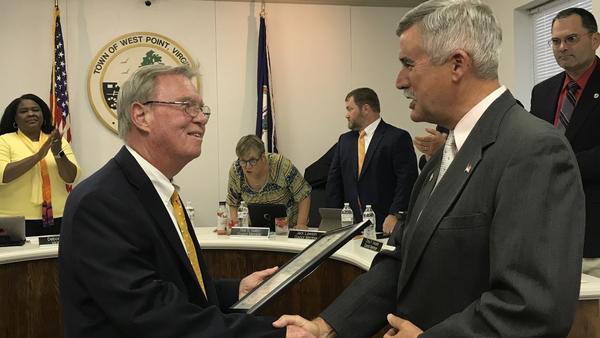