Col. Anthony S. Pike has announced he will retire at the end of 2022. 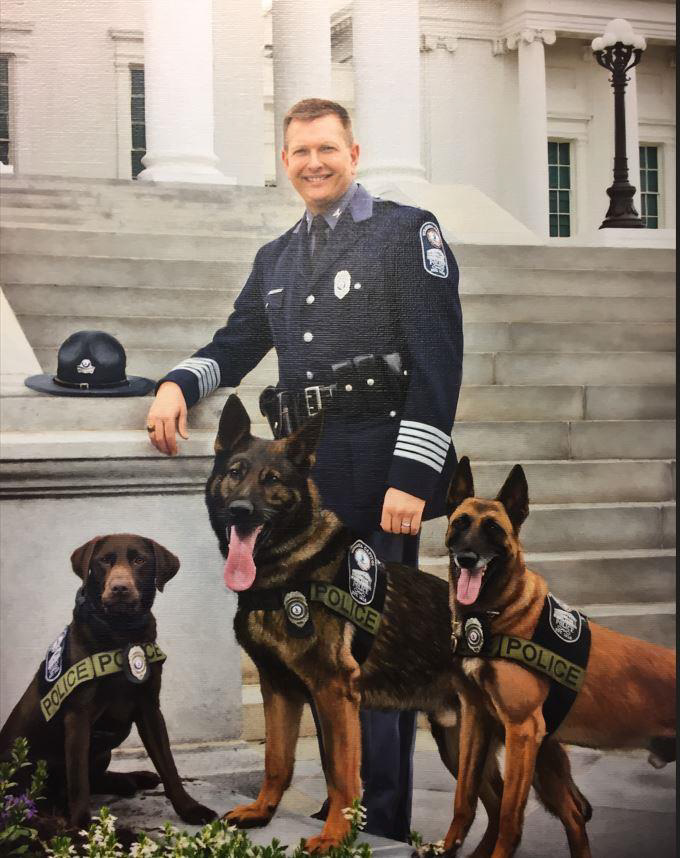 RICHMOND – Col. Anthony S. Pike, who has guided the Virginia Division of Capitol Police during a period of rapid changes on the international security front and has helped strengthen not only the agency's capabilities but the overall safety of Capitol Square, has announced he will retire at the end of the year.

Pike, 57, has spent his entire career in public service, first joining the U.S. Army straight out of high school in Wytheville and then serving in the Virginia Department of Game and Inland Fisheries from 1988 until 2010, when he joined Capitol Police as the agency's assistant chief. He became chief the following year.

“I became a grandfather last week for the first time,” Pike said, “and the months leading up to it gave me time to reflect on my life and what's ahead for me. Just as I can sincerely say it's been the privilege of a lifetime to spend my career in service to others, I can honestly say I've realized it's time to transition to a private citizen.”

Capitol Police is responsible for 24-hour-a-day public safety services to members of the Virginia General Assembly; the governor and his family; lieutenant governor; attorney general; Virginia Supreme Court justices; Court of Appeals judges; thousands of state employees and more than 100,000 annual visitors to the Capitol complex. While its primary responsibility is the Capitol Square area, the division has jurisdiction throughout the city and has close working relationships with Virginia State Police as well as law enforcement and emergency response agencies throughout the region.

Pike is one of the longest-serving chiefs in the history of Capitol Police, which traces its roots to 1618 and is recognized as the oldest law enforcement agency in the United States. The world's security climate has changed dramatically since Pike's appointment, notably providing for greater discourse within the public square and navigating a global pandemic.

Virginia Capitol Police have provided law enforcement services for nearly 700 rallies, protests and events at Capitol Square since 2011, some drawing in excess of 20,000 people. Over the same period, Capitol Police K-9 units have logged more than 8,400 utilizations.

“Colonel Pike has been a steady fixture and incredible asset for the Capitol since his appointment as chief of the Division of Capitol Police in 2011,” said Del. C. Todd Gilbert, speaker of the House of Delegates and one of the seven members of the Legislative Support Commission, whose oversight responsibilities include Capitol Police. “His commitment and professionalism have not only kept the Capitol and its visitors safe, he's honored the agency's long history of public safety. The division's excellence is recognized far and wide among law enforcement agencies. In short, Steve's remained a stalwart, stable and successful leader and public servant, and we owe him and the division our profound gratitude and hearty congratulations.”

The agency has grown considerably under Pike and is now authorized for 83 sworn officers among its approximately 125 employees. Pike has also overseen significant upgrades in the division's technology and training, as evidenced by the fact that earlier this year, Capitol Police were fully certified for the fourth time by the Virginia Law Enforcement Professional Standards Commission. Less than 20 percent of all law-enforcement agencies in the state are fully certified.

In addition, Pike has used his work with national organizations, especially the National Conference of State Legislatures, to ensure Virginia has the best possible security features in its new General Assembly Building, which is scheduled to open early next year.

“Colonel Pike has not only served the Capitol Police well but the Commonwealth in his many years of service,” said Sen. Mamie Locke, chairwoman of the Senate Rules Committee and a member of the Legislative Support Commission. “He has done an amazing job leading through the pandemic and some difficult times, and he has done so extremely well. I am proud to know him and wish him well in retirement.”

Pike has held various leadership positions with NCSL, including on the executive committee, and he was past president of the National Legislative Services and Security Association. His additional past chairmanships include the Virginia Law Enforcement Professional Standards Commission and the Crater Criminal Justice Training Center.

“In his 12 years with the Capitol Police, Steve Pike has done an amazing, professional job in obtaining certification for the Capitol Police and instituting new training and recruitment standards,” said Susan Clarke Schaar, clerk of the Senate of Virginia and member of the Legislative Support Commission. “His expertise has been recognized not only in Virginia but nationally and internationally. He will be missed!”

“Colonel Pike is a proven leader and has overseen the success of a highly professional and extremely well-run state agency,” said G. Paul Nardo, clerk of the House of Delegates and who also serves on the Legislative Support Commission. “He's achieved distinction for the agency with repeated reaccreditation by the Virginia Law Enforcement Professional Standards Commission, overseen record graduating classes of Capitol Police recruits and helped usher the historic DCP entity into its fifth century of service in 2018. With this valuable strategic vision, cooperative style of management and pragmatic approach to problem solving, these and many other successes during Steve's tenure highlight the heights he's achieved since 2011. I'm so very proud of and deeply impressed by his service and his stewardship of Capitol Police and count myself truly fortunate to have worked so long and well with someone of his high caliber and good character.”